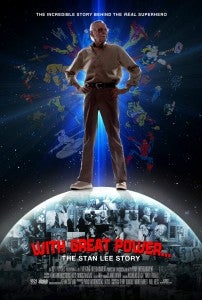 A new documentary film heading to home video this week that purports to be a history of Stan Lee's life and career, is actually little more than an 80-minute PR reel for the comics icon, parading dozens of celebrities in front of the camera to extoll his virtues without ever attempting to answer the hard questions of Lee's career. That may not seem like a fair assessment--after all, the film is about Lee, not about his conflicts with Jack Kirby and Steve Ditko and the Marvel and Stan Lee Media and on and on. Certainly, this documentary gets Lee to talk a bit about those conflicts, although he downplays them and his version of events is not seriously challenged. But a feature-length film that purports to be a definitive chronicle of a fifty-year career fraught with conflict and controversy ought to at least acknowledge that there are more to them than a few minutes, or a mention, each. Where the movie does best is in depicting Lee as he interacts with his wife and others. The way he talks about Jack Kirby pulls at the heartstrings in a way that will leave all but the most dedicated of the pro-Kirby, anti-Lee stalwarts to question whether Lee is such a bad guy. He claims to have made up with Ditko, even to the point where they very recently discussed the possibility of working together again. Bonus features see him interacting with Todd McFarlane at Lee's Hollywood Walk of Fame presentation, with Joe Quesada and Kevin Smith at UCLA...and lots more with his wife, Joan, who comes out of the film as his muse, who inspired him to create comics and then spent so much of his money that he had to keep doing so. It seems clear that the filmmakers were interested in that aspect of Lee, as so much of it remains in the film in spite of the fact that it's nominally a movie about his career, but at the end of the day, the length again comes into play; in order to give Lee's long, distinguished and controversial career its due, a filmmaker would have to undertake a Ken Burns-style, six-to-ten-hour format and failing that, this movie has to give viewers a peek at these fascinating moments and move on. They're hinted at early on, though, when Lee describes the first long-form interview that he and Jack Kirby did with a newspaper reporter about the success of their work together.

In spite of shilling for Kirby to be there, Lee says, and then conducting the interview together, something like 80% of the story was about Lee's magnetic personality, his boundless enthusiasm and capacity for creativity. Kirby got the other 20%, with a lot of that focusing on his dreary workaholic ways and his unkempt appearance and less bombastic persona. The film--and Lee--chalk it all up to Lee being able to better present and market himself, something that allowed him to stand head and shoulders above Kirby and other prolific creators of the Golden and Silver Age throughout the years almost as much as the scope of his impressive catalog of work and co-creations. It's that element that comes through the most in this film--for both the right reasons as described here, and the wrong ones, as so much of the movie just ends up being a parade of all the great things that "he" created peppered with the occasional odd reference to how there was an artist involved. The length - 80 minutes, in total - becomes an issue more than just in the case of the controversies; even the material that's there on the screen feels a bit shallow. The beginning of the film feels less forced and choppy than the rest of it, but the World War II era--fascinating stuff!--feels glanced over. If the film is meant to be a primer for those outside of the comics community, who don't know Stan and who would like to learn more about an American icon, these shortcomings may be somewhat more understandable--but for those people, it will be a confusing portrayal, as the first third of the film seems to totally conflate the timeline. There's a good deal of talk about Stan Lee and Jack Kirby's years of fruitful collaboration, along with screen grabs of their work together on Fantastic Four, X-Men and the like--that sets the story, for those of us who know the history, firmly in the '60s. It's shortly after this, though, that first World War II and then the comics scare of 1954 occur, giving the impression that either those characters were created in the Golden Age of comics or that the movie was describing the pre-World War II Timely Comics years as Stan and Jack's five years of unparalleled success. In either case, it's obviously not a correct impression. The technical problems shouldn't get in the way of what's an enjoyable little movie with a lot of interesting trivia, including some that I'd never heard before. That said, the idea that the film got convention screenings, and a home video release, seems to suggest that it's a bit more in-depth, complex and complete than something you'd see any given Friday night on A&E--which isn't the case. They sacrifice depth for breadth, choosing to look at the whole of Lee's career and giving each year a minute and a half of screen time, rather than examining the period during which he was prolific in comics and giving it some more context and flavor. It's an understandable choice, but one that ultimately makes the film little more than a "Stan Lee's greatest hits" reel.

Marvel Reveals What Thor Fears Most