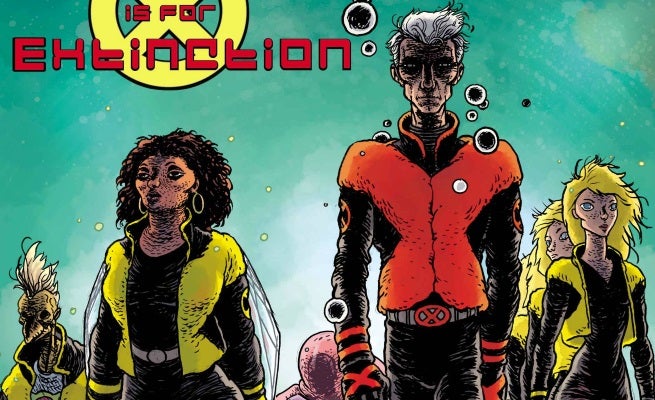 Marvel Comics has announced a new Secret Wars series bringing the X-Men back ot their turn of the century era. E for Extinction will see writer Chris Burnham and artist Ramon Villalobos revisiting the New X-Men era, black leather jackets and all.

E for Extinction was the storyline that kicked off Grant Morrison's tenure as writer of the flagship New X-Men title, with Frank Quitely contributing art. Burnham, as an artist, has been a frequent collaborator with Morrison on projects like Batman Incorporated and, currently, The Nameless, so its fitting that he should take the reins of a seire revisiting Morrison's X-Men work.

One of the most notable aspects of Morrison's New X-Men was that the population of mutants in the Marvel Universe was threatening to outnumber that of homo sapiens. Mutant pop stars and artists were dominating pop culture, and humanity was about to take its first steps towards extinction...until House of M happened, and "decimated" the mutant population.

Burnham and Villalobos' series tell an alternate version of E for Extinction's events, where Magneto has once again come to run the Xavier School for Gifted Youngsters.

Check out the gallery below to see Villalobos' character designs for memorable characters from the New X-Men era, including Beak, Angel, Kid Omega, Glob Herman, and the Stepford Cuckoos.