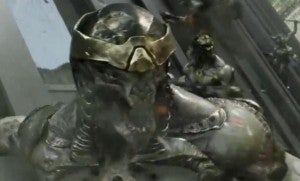 Well, if this screen capture (provided by Super Podcasto Magnifico!) is to be believed, then the Frost Giants are all but ruled out as Loki's army in the upcoming Avengers film, but the identity of these (presumably) alien soldiers is still up in the air. Other than that, the dialogue-heavy spot will please Whedon fans and leave comic book fans who loved the "We have a Hulk" line satisfied while providing the four people left on the planet who don't know who these characters are with a chance to play catch-up as Tony Stark and Loki trash-talk each other about what each has in his arsenal. See the spot below and feel free to chime in at the bottom of the page with your theories on who this ugly-looking spud at right might be.