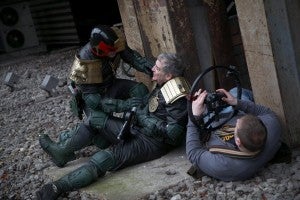 A new trailer for Judge Minty, a terrific fan film set in the world of Judge Dredd and signed off on by the character's rights holders, has hit the Internet today, ahead of the release of the film itself which will stream for free on Vimeo and YouTube in April or May. While the trailer is quiet, the film itself is action-packed, drawing from 2000 AD comics to create a well-oiled look at the character and the world of Dredd. The short film starring Edmund Dehn and Dredd artist Greg Staples has been touring festivals since its debut last year. Produced by fans in their own time and for free, the film is based on a character from the early days of Judge Dredd and follows Judge Minty as he takes the 'Long Walk' into the irradiated wastelands of the Cursed Earth. "It was tricky picking what to include and what to keep back, as it's not a three-hour epic, and wanted to keep some surprises rather than trailer it do death," Steven Sterlacchini and Steve Green, who made the film, said. " We've been refining shots since it premiered at the Thought Bubble convention last year, so there will be slight changes as well as a new credits sequence (some of which can be seen in the trailer). We hope people enjoy it, and like to thank fans, creators and Rebellion for being supportive while we've been making this film."