Tom Cruise's version of The Mummy will launch an entire cinematic universe of classic Universal Studios movie monsters, re-imagined for the modern era.

In this first chapter of the saga, Cruise will play a man named Nick Morton, who unwittingly transports the corpse of an ancient Egyptian princess (Sofia Boutella), only to discover she's an undead Mummy with terrible supernatural powers. The twist comes when Nick "dies" and is resurrected by the Mummy's power, invariably connecting his life force to the monster he must slay.

The Mummy has one big connective thread to the larger Universal Monsters shared universe, in the form of Russell Crowe, who plays the modern version of Dr. Henry Jekyll, who works for an organization that hunts down the sort of monsters we'll see in this shared universe. Of course, Jekyll will have his classic evil alter-ego, Mr. Hyde, who we finally see in the latest promo for the film.

Main takeaway? He's not the abomination (see what I did there) that actor Jason Flemyng's Jekell/Hyde was in The League of Extraordinary Gentlemen, but if this the only stage of his Crowe's transformation, it's also pretty anti-climatic... 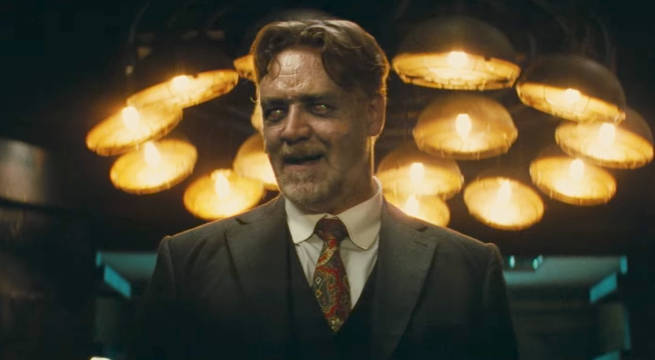 SYNOPSIS: From the sweeping sands of the Middle East through hidden labyrinths under modern-day London, The Mummy brings a surprising intensity and balance of wonder and thrills in an imaginative new take that ushers in a new world of gods and monsters.

The creative team on this action-adventure event is led by director/producer Alex Kurtzman and producer Chris Morgan, who have been instrumental in growing some of the most successful franchises of the past several years—with Kurtzman writing or producing entries in the Transformers, Star Trek, and Mission: Impossible series, and Morgan being the narrative engineer of the Fast & Furious saga as it has experienced explosive growth from its third chapter on. Sean Daniel, who produced the most recent Mummy trilogy, produces alongside Kurtzman and Morgan.

The Mummy opens in theaters June 9, 2017. Let us know if you're excited for the film by Ranking Your Anticipation Below!

WATCH a First Look at Russell Crowe's Mr. Hyde in The Mummy

Comedian Chris Rock Reveals He Has Tested Positive for COVID-19