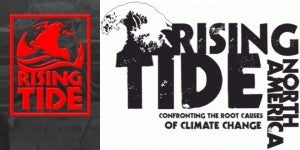 The fictional hacktivist collective on Marvel's Agents of S.H.I.E.L.D. uses a weirdly complicated website domain (wearetherisingtide.com), so it's probably no surprise that there's another group out there that  uses the name. What's possibly more surprising is that the real-life Rising Tide is also an activist group, and not particularly thrilled at the way the activist community in general is depicted in the series. Rising Tide as an organization came into being in 2000, and since then has picked up chapter in the U.S., U.K. and Australia. They estimate there are more than fifty active local chapters in North America, aimed at combating climate change and reliance on fossil fuels through nonviolent direct action. They have launched a petition to ask Disney to change the name of the villainous organization in S.H.I.E.L.D., saying that the entertainment giant has co-opted their long-established name and a suspiciously similar logo for the purposes of the TV series. "In this spinoff of the popular Avengers movie series, Rising Tide is a shadowy cyber-terror group similar to Anonymous," explained the real Rising Tide last weekend. "Their role in the show is to expose super humans, like the Hulk and Thor, and secret government agencies like S.H.I.E.L.D. In our estimation, exposing governmental secrets and lies is a most worthy pastime and similar to what groups like WikiLeaks and Anonymous have done in real world. Unfortunately, the series plays to our mainstream culture's fears around anarchists and radicals, and portrays the group as a threat to national security. Some reviews call the group 'cyber-terrorists.' This is par for the course in a Hollywood that uses pop culture to turn government agents into heroes and seekers of truth, justice and ecological sanity into evildoers."

Xbox Fans Call For the End of Xbox Live Gold