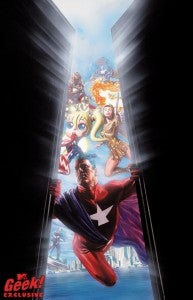 Kurt Busiek announced today that he will be returning to his critically-acclaimed, creator-owned series Astro City. Delayed since it was initially teased in 2010 due to Busiek's health, Astro City will roll out with the next batch of solicitations and hit the stands on June 5 with a new #1 from Busiek, artist Brent Anderson and cover artist Alex Ross. "It'll be an ongoing monthly, open-ended series," Busiek told MTV Geek. "Since there isn't a single ongoing lead character or team, it's not really a case of the series following a particular set of adventures -- we'll be exploring the people of the city and the superhero genre, as before, and seeing what kind of stories we can tell that you just can't get anywhere else, stories ranging from a day in the life of a sorcerer's assistant to the ongoing relationship between Samaritan and Winged Victory, and more. We have plans to visit other planets, to reveal more about Astro City's past, to explore the life of super-powered people who never chose to become heroes or villains, and lots more. I even intend to finally get to my talking gorilla story, and the one about the group of former kid sidekicks who get an old crime-mobile from the 40s working and head out on a road trip as they try to figure out what to do with their adult careers." The writer adds that, contrary to early reports, the series will not be branded "New 52." DC's line-wide relaunch, which has happened since the most recent issue of Astro City, will not impact the title at all, except that there is no longer a WildStorm imprint to publish under, so Astro City will carry the DC Comics logo on the cover. "As we start the new ongoing series, we're starting a new background story, one about the Broken Man, who he is, what he's up to, and what it means for the city as a whole," Busiek explained. "In some ways, it goes back to those very early issues of the series, too, and there have been hints and portents in the series so far, but now that the Silver Agent uber-arc is wrapped up, it's the Broken Man's turn to be in the spotlight."

Astro City Returns As An Ongoing Series at DC Comics