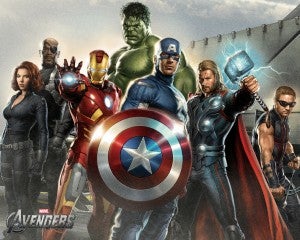 Following yesterday's release of 10 Avengers desktop backgrounds from Wyndham Hotels, Toys R Us has followed suit today, with twelve new backgrounds and 9 PDF coloring book pages available on its new Avengers microsite, as well as a family-friendly trailer for the film, which will be out next month. Agent Coulson isn't represented this time, but each Avenger gets a solo wallpaper, along with one for Nick Fury and five new group shots. All of them are painted artwork rather than stills from the film, suggesting (given what we've seen from the box art) that they may be tied into the official Avengers action figures, or even the coloring books that the pages are from. There's no real sign of any plot spoilers or anything in these new images, many of which we've seen before, although it's worth noting after all of these promotional shots have featured it so prominently--what's the deal with Stark Tower? Will we see Iron Man's business--ahem--take a hit in the new flick?