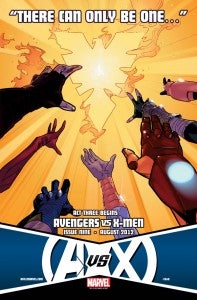 Marvel Comics claims that "there can be only one," and while it's pretty obvious at this point who they mean, it'll be at least another month before the path they take from Point A to Point B is clear.

Meanwhile, here's an image that suggests that Phoenix Force won't stay with its unruly mob of hosts for long, and will have to find a single body to inhabit. The teaser is for Avengers vs. X-Men #9, the opening of the story's "third act" and the issue that will kick off the month of August for Marvel and the massive finale for the story that's six months in the making. Who will the Phoenix choose? Well...!

This August, the comic book event of the year – Avengers VS. X-Men – reaches critical mass as Earth’s Mightiest make their last stand against the Phoenix Force. But when the Phoenix Force yearns for a single host, who will it choose? There can only be one! Act Three kicks off in Avengers Vs. X-Men #9, hitting comic shops, the Marvel Comics app, and Marvel Digital Comic Shop this August.

Avengers vs. X-Men Preview: There Can Be Only One