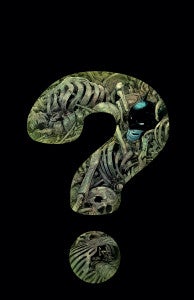 Warning: potential spoilers ahead after the jump. You can read the first few paragraphs before the ad safely.

Batman writer Scott Snyder announced today via Twitter that the final chapter of Batman: Zero Year - Dark City will be delayed a month, no longer appearing in Batman #28. Pushing that story--originally solicited for release on February 12--back a month to allow for an expanded issue, #28 will instead be a story set six months in the future of the current continuity, teasing the major Batman Eternal and bat-family events of 2014. "As I was finishing Batman #28 last month, I started to feel that the issue seemed very cramped. There are a lot of big moments in it - super storms raging, bat-vehicles whirling - and I was compressing every one into a multi-panel page," Snyder wrote. "Still, to extend the issue would put pressure on Greg, and with an issue that has key crime alley scenes and core moments... I didn't want him to have ANY pressure. No one is as maniacal about staying way ahead of his deadlines than brother Greg is and I just thought it'd be cruel to saddle him with extra pages, esp. now, with the holidays. Believe me, if I gave Greg extra pages, he'd finish them ahead of time, no problem, but why put extra work on my partner - and my friend - for being ahead?" 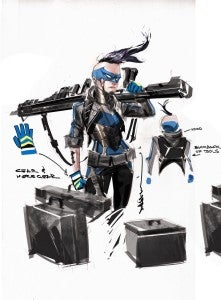 So, he wrote, he got together with the other Gotham writers and started to brainstorm a stand-alone tale that could be big enough justify putting Zero Year on hold. The result will be a story written by Snyder with James Tynion IV and drawn by Dustin Nguyen, which will show off a number of future events, including a character seen at right who appears to be Batman supporting character Harper Row in a version of the Nightwing costume. "And believe me, the issue will have a lot of surprises. After all the support you've shown us on Batman - and on ZY especially - we owe you BIG. Big like a debt we can never, ever repay, big. But with this issue, we'll try very hard to fill the pages with thank you spoilers," wrote Snyder. Since his identity was revealed during the first issue of Forever Evil, there's been some speculation that Batman's adopted son, Dick Grayson, is in danger of dying during that event. Nightwing writer Kyle Higgins has resisted fan inquiries about the future of the character and the title, even though while rumors place Grayson in Batman vs. Superman and theoretically suggest that the character is safe in the long term in the comics. Row, meanwhile, appeared at the start of Snyder's Batman run and has been widely speculated as a potential replacement for Damian Wayne, who recently died, as Robin. Snyder has said that she wasn't designed for that reason, but that she's a big part of his personal Batman mythology.