This month, it was Edison Rex...In Space! In a flashback episode that saw Edison foiled once again by Valiant and Gold Key, our hero (well, villain at that point, but our hero since we're reading his book now) found himself shunted to the nearest inhabited planet in the hopes of avoiding jail time--but it wasn't a friendly one. Forced into combat for the amusement of a brutal empress, it was only after battling his way through all comers that he could earn his way home...kind of. Giving the audience a look inside the mind of M'Alizz, the issue sets up any number of possibilities for future storylines while giving an answer to that question we've been asking from the beginning: Why the heck does she put up with this guy? Writer Chris Roberson and artist Dennis Culver joined us to talk about the issue--and remember, this is all very spoilery. If you don't have a copy yet, you should go buy it and read along with us. It's good, we promise. 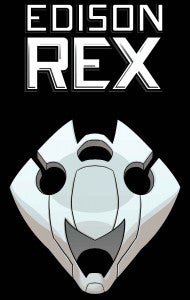 ComicBook.com: It's been a long while since we saw Valiant in action, hasn't it? I can't remember the last time. Chris Roberson: We last saw him in a flashback sequence in issue 7, which is the beginning of the second arc of stories. This issue, #13, begins our third arc, so it seemed fitting to bring him back on stage again, just to remind everyone what the setup is. And we finally got to meet Gold Key! Culver: The only issue I can think of in our whole run where Valiant isn't at least mentioned by name is issue 11 and if you're counting the Rexfiles well then he's mentioned that issue too. He may be dead but his presence is always felt! ComicBook.com: It's going all the way back to Edison Rex #6 to see the last time I pointed this out, and back then Dennis didn't do the commentaries with us, so Dennis: Is that supposed to be Buzz Lightyear's space suit, or is it just similar becuase of the color scheme? Culver: It's just a coincidental color scheme. ComicBook.com: Are there any particular designs we should recognize among the challengers Edison unseats in the flashback here? Culver: Naw I was just making them up as I went along and I told Steve to color them however he wanted since they were (mostly) one-offs. 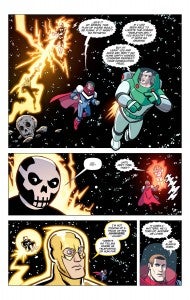 ComicBook.com: How detailed a timeline do you have of Edison's life and exploits, and of the universe at large? We've talked about how you like the idea of dropping us into a world where there is background but you don't necessarily need to know all of it every month...but recently a lot of these one-and-done stories seem to be drawing on a rich history that hasn't been explicitly shown on page before. Roberson: Well, we know a LOT more about Edison's world and its history (past AND future) than we've shown on the page so far, and we've been gradually pulling back the curtain on bits and pieces of it as we go. As far as Edison's life and exploits in particular, though, it's more a question of key landmark moments, and we're gradually filling in the details as we go along. But we've lately been talking about the need for a wiki database just to keep everything straight, since it is getting VERY complicated. Culver: Rex's universe expands in all directions. ComicBook.com: Is it just me, or does this story feel a bit like the Superman/Wonder Woman story from a few years back where they're whisked out of time to fight for eons, or maybe Planet Hulk? Are you trying to evoke a particular superhero storytelling trope here? Roberson: Not really trying to evoke any existing story in particular, more the "superhero in space" trope that we used to see a lot of. 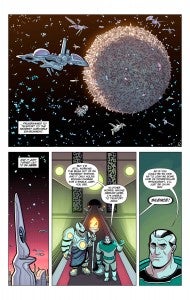 ComicBook.com: Do you guys know how Rex cheated in the arena? Or is it not really relevant? Roberson: I'm not sure. Dennis, do we know? Culver: We do now: A Precog Device and a TK Harness. Which kept Rex one step ahead of his opponents and enhanced his strength and speed. Both forbidden in the arena for obvious reasons! ComicBook.com: Was taking M'Alizz to earth always part of the plan? It seems as though leaving her behind would have served the Regent not at all. Roberson: I think that was a happy accident for the Regent, who would probably have preferred that M'Alizz die in the arena. But it worked out in his favor, either way. ComicBook.com: Certainly here we can see at least a couple of storylines that could come up in the future, either connected or separate. Do you have plans to deal with this Regent? Roberson: Maybe? Culver: Every part of the cow gets used eventually. 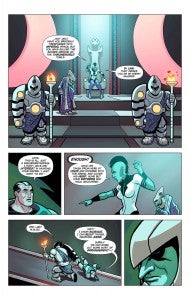 ComicBook.com: My first curiosity: Would the new Regent even keep the whole "society by combat" in place? It seems like it's just begging for somebody to knock him off pretty quickly. Roberson: He's clearly sneaky and has demonstrated a willingness to cheat the system. I think he'll handle himself okay. Culver: The great thing about ruling for Edison is any challengers would have to defeat Rex to overthrow the Regent. Absolute power via loophole. ComicBook.com: The RexFiles sure implies that M'Alizz learning the truth soon might be a concern. Does she have any suspicion at all, or does her belief that people live by a code render her kind of incapable of processing that possibility? Roberson: If she suspected anything, Edison would already be dead. Culver: Rex is the only one that knows the truth about that.

Xbox Heaps Praise on The Legend of Zelda: Breath of the Wild

WWE NXT WarGames: Here's What Duke Hudson Looks Like With His Head Shaved