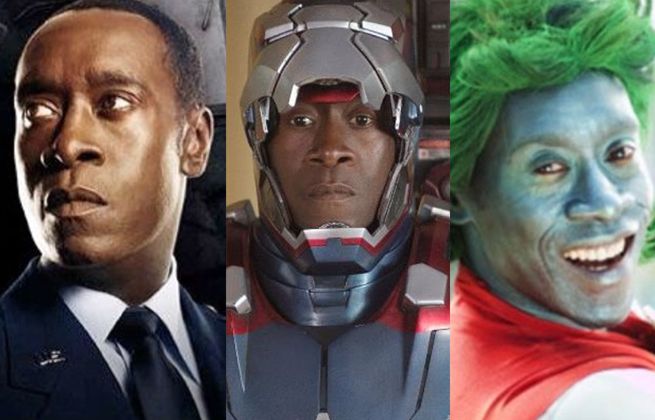 In Iron Man 3, Rhodey gave his armor the red, white and blue treatment and changed his superhero name to Iron Patriot. Cheadle will next appear as Rhodey in Avengers: Age of Ultron, which is scheduled to be released in movie theaters on May 1, 2015.

In addition to playing War Machine/Iron Patriot, Don Cheadle also plays Captain Planet, and he has appeared in three short films as the character.

Other notable movies that Cheadle has appeared in include Devil in a Blue Dress, Rosewood, Boogie Nights, Out of Sight, Traffic, Ocean's Eleven, The Rat Pack, Things Behind the Sun, Swordfish, Crash, Ocean's Twelve, Ocean's Thirteen, Reign Over Me, Talk to Me, Traitor, and Hotel Rwanda. Outside of movies, Don Cheadle is best known for playing Marty Kaan in the TV series House of Lies.