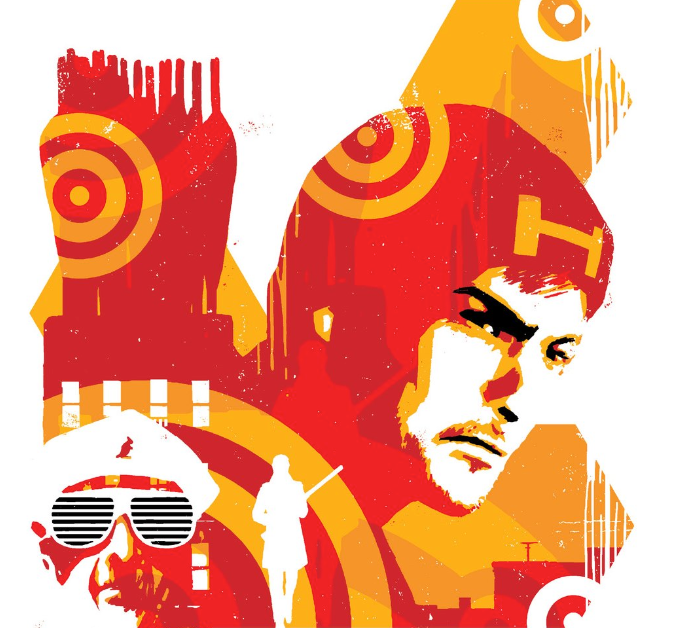 I've always thought of music as equal parts math and emotion. I know that I'm listening to great rock, jazz, or blues albums when I feel the music. It creeps under my skin and fills my heart and eyes. There's something raw that comes from the musicians' mastery. No matter how free and loose a song may feel, it's sound arranged and layered in time with exacting precision. Musicians are completing a complex formula that conjures an intangible reaction in your soul. Really good comics, the absolute best, are capable of doing the same. Hawkeye #21 is one of those comics. David Aja is like a musician in these pages. He is conveying emotion, tone, and drama so perfectly that the experience is immersive, inescapable, and complete.

The music that comes to mind when reading Hawkeye #21 is a little more modern though. When I turned the final page, The Heavy's "Short Change Hero" was ringing in my ears. From the rolling thunder that introduces the single to the Western influenced guitar licks to the foreboding shadow that haunts the lyrics, it's all there. After you read the issue (and you most definitely should if you like comics at all), give it a listen and you'll see what I mean.

If you haven't read Hawkeye #21 (or listened to "Short Change Hero") turn back now because I'm about to spoil all of it. It's impossible to discuss the poignancy of this comic without delving into the details. This is the last warning I'm going to give.

The song starts with the sound of distant thunder rolling in, the shoveling of dirt from a grave, and a strain of humming straight from a Sergio Leone film. It's an oppressive piece of foreshadowing that's perfectly in line with the introduction of Hawkeye #21. Clint, Barney and their neighbors are preparing for war. Traps and blockades along with final words and farewells are all being made. There may be no storm clouds in the sky, but darkness is on the horizon ready to overtake everything Clint has fought for in the past 20 issues.

Aja distills this preparation into a tremendous title page. Two columns of six panels each reveal the people and work occurring within the building in silhouette. Some of the panels are clear in their purpose showing neighbors nailing up doors and evacuating families from the future battleground. Others only make sense upon a second reading. The building blocks of what is to come, triumphs and failures alike, are buried in this page. Between the two columns stands the apartment building itself, the cherished centerpiece of this entire story cloaked in a disquieting red background. It is both the cause and location of the showdown to come. Aja not only presents the present, but summarizes all of what has led to this darkening finale.

Matt Fraction and Aja load the first half of the story with foreshadowing. It makes a second (and third (and fourth (and so on))) reading of Hawkeye #21 a significantly rewarding and deeply saddening experience. Conversations between friends, lovers, and neighbors are all infused with tension. Each character recognizes the seriousness of what they are about to face and impart that apprehension. It's often just as much about what is not said as what is. When Clint is speaking with Jessica, he apologizes for the past, but refuses to acknowledge the future. Despite his obvious fear, he cannot ask for help or plan for a tomorrow of which he is skeptical. Clint and Barney are so well realized here that every sentence and gesture contains elements of subtext.

And then, in a sequence that is stunning in its simplicity, trouble arrives. Headlights emerging from darkness in perfect silence signal the beginning of the end. They are ten spots of yellow on black capable of inducing incredible anxiety.

The battle between the tracksuit mafia and tenants of Clint's building is pitched. Fraction and Aja don't waste time with excess words. Both sides are reserved to shouted orders, terse cries, and outbursts. This isn't epic superhero action; it's violence. Everything about the sequence is fast and organic. Even the biggest moments, like when Clint and Gil's dad pour fiery charcoals onto the heads of those breaking in, are tempered by the chaotic reality of falling fire and flying missiles. If the sequence bears a connection to any genre, it is the Western. There are high stakes and tremendous actions here, but they are grounded in the dirty reality and outcomes of violence. While it may be exciting, there's nothing fantastic or delightful about what is occurring.

Even as it seems everything is going to plan, there's an air of risk that acknowledges the tremendous danger that everyone is in. That tone sets up the climax of the issue, no matter how hard it may be for Clint or myself to accept. Aja and Fraction crank up the volume as they turn the tables upon the heroes. Colorist Matt Hollingsworth shades the ending of Hawkeye #21 almost entirely in reds with burnt oranges and yellows punctuating the trauma. It's the same red that was cast over the building on the title page and it's returned to fulfill its deadly promise.

The final six pages are perfect. This is music. Panels, colors, figures, and words are all utilized in a manner that is both intensely human and mathematically precise. Everything has been climbing to this coda and you can't look away. What happens here makes it plain that while Hawkeye was always a story about heroism, it was also a story about failure. Clint and Barney are two good men trying to do a good thing, but this isn't a superhero story where everything turns out okay. This ain't no place for no hero. In the real world, doing the right thing is no guarantee of success. And so Barney dies in the arms of his younger brother. 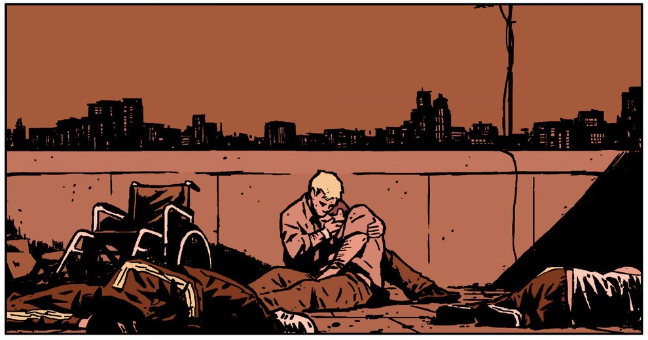 That one panel will break your heart. I know it broke mine. Even upon a third reading I still grimace and tear up at this point. No matter what comes next in Hawkeye #22, it comes at this incredible cost. Over the course of the issue, Aja and Fraction have built to this single note and it lands exactly as it is meant to: heavy and hard.

My emotional response to Hawkeye #21 was intense. From the anxiety at the start to the excitement of the battle and finally the dread and pain of the end… It all feels real, and that's because it is. Aja, Fraction, and Hollingsworth are all musicians. They are making perfect use of the comics form to create emotion. No matter how loose or organic the experience may be, their choices are exacting and precise. They are masters of their art and the result is enthralling, pulling you in and refusing to let go until the final page is turned.

You feel all of Hawkeye #21 and it hurts.

REVIEW: Hawkeye #21: This Ain't No Place For No Hero