As our coverage of Heroes Con 2009 draws to a close, it's safe to say that we talked to a multitude of people this weekend. Some famous, some hoping to be famous, some just there for the festivities, and some hoping to show off hours of their own blood, sweat and spandex in the form of a costume. In chatting with several of these costumed convention attendees, between countless demands that they take pictures with other convention goers, we heard quite a bit about the reasons as to why they went all out for a few days in summer heat of Charlotte, North Carolina. For Holly Tillman, Christina Hardy and Lauren Hopkins, dressing as the Powerpuff Girls allowed them to show off, as they put it, "the geek that's in our blood." Taking almost two weeks to make, their convincing costumes allowed them

to interact more with the convention goers. "We enjoy the camaraderie", added Hardy, "and the free stuff," said Hopkins, laughing as they posed to take more pictures with other convention attendees. Jason Transou and John Spangler came as arch-enemies and DC Comics characters Lex Luthor and Superman, respectively, with Spangler taking the chance of this weekend's festivities to use a Halloween costume he made a few years ago. Transou added, "since we were coming together I figured I would come as Luthor; it just made sense." Transou even went as far as to shave off what he described as "a pretty thick beard" for the occasion. He assured me, however, that the beard would come back immediately following the conclusion of the convention!

"When you're doing this if you're going to do it you might as well do a good job and really go all out," said Robert Smith, whose very convincing Batman costume came after spending "a few months" of work on the very detailed outfit. After coming as Marvel hero Iron Man last year, he put Batman together for this year, adding that the effort he puts into his work is so that, "when kids see your costume you're really giving them the best representation of the character that you can." That can be an important detail, as younger children and readers are certainly going to be the future of the comic book industry.

Jessica Smith came in a very puzzling costume for some, dressing as DC heroine The Question, a character known for wearing a faceless mask. She assured me that the costume was very practical. "I always liked her mask and I wanted a simple way to do it. This is simply cheesecloth and wire, so I can see pretty well and take it off if needed to eat as normal. Other people have done really complicated things with spirit gum and pantyhose and such, but this way is easier." Inventive, and certainly head-turning, as many attendees stopped to watch her easily, and without a face, navigate her way through the crowd. 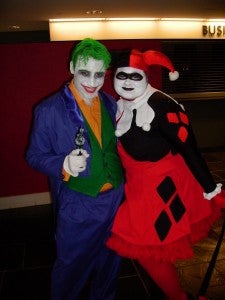 The Joker and his girl Harley Quinn made an appearance, although underneath all that makeup and color lies the true identities of Adam Davis and Rachel Wilson, with Wilson taking credit for the costumes, herself being a student and costume designer. "When we first met, I was just getting into comics," said WIlson, "and our relationship is a bit like Harley and the Joker's." Hopefully that means in the intensity between the two characters. Davis added that the convention really allows them a chance to have Rachel's work showcased, as they came dressed as X-Men Rogue and Gambit the day before. Even though major publishers such as DC and Marvel were represented at the show this year, Renee Marie 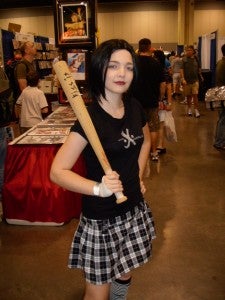 took the opportunity to dress as Devil's Due Publishing heroine Cassie Hack of the noted series Hack/Slash, a book focusing on a young woman with a penchant for fighting back against archetypal horror film figures and villains. "The first time I saw the first issue, it had this awesome chick beating the head of some guy with a baseball bat, and it just looked cool. I fell in love with the series," said Marie, adding that dressing up just added to the "already great and fun" experience she was having at Heroes Con. Even one of Earth's busiest defenders took time out to make an appearance at Heroes Con, identifying himself as "Hal Jordan", this Green Lantern (seen above with Wonder Woman) told me that he wanted to represent "one of the greatest heroes out there" with his costume, which he said took over forty man hours to put together, using spandex and lots of patience. His authentic lantern also was a labor of love, as lots of different parts and glue went in to making this replica. While there were certainly more people dressed in costumes than there were hours in the day to talk to all of them, one thing remains clear, that each and every one of them loves getting this chance during the year to have fun, indulge in a side of their hobby and their passion that may not get much breathing room at other times, and to share that with other convention goers, who certainly appreciate the effort that goes in to making such life-like costumes. It's safe to say that thanks to these creative and willing participants, Hereos Con certainly has its fair share of heroic representation!

Heroes Con Costume Wearers Share Their Identities With Us!