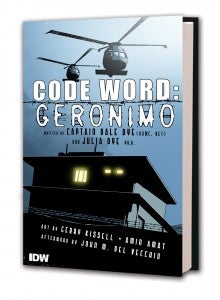 Even though lots of mystery surrounds the details of the raid that led to the death of terrorist Osama bin Laden, IDW Publishing and Charlie Foxtrot Entertainment are attempting to bring to life the details and tense events that led up to this event in a new graphic novel due out this September. Code Word: Geronimo will be written by Capt. Dale Dye, USMC, Ret. and Dr. Julia Dye, PhD, who will take some creative liberties with the script. “Due to entirely appropriate security concerns, there is some creative license in our script,” said Captain Dye. “But I think readers will be gratified with the detail and thrilled with our take on one of the most daring and successful commando raids in American military history.”

SEAL Team 6 has been lauded and celebrated for their heroism and the risk involved in this operation, and this graphic novel seeks to reward them for their work. Illustrating this endeavor are artists Gerry Kissell (The A-Team: War Stories, Iron Sky) and Amin Amat (Buckaroo Banzai, Iron Sky). John M. Del Vecchio, decorated Vietnam veteran and best-selling author of the The 13th Valley, will also provide afterword material. A portion of the proceeds from Code Word: Geronimo will be donated to a charity supporting military service members. This is not the first time that Osama bin Laden has been portrayed in comics, but this is certainly a realistic and real-world scenario.