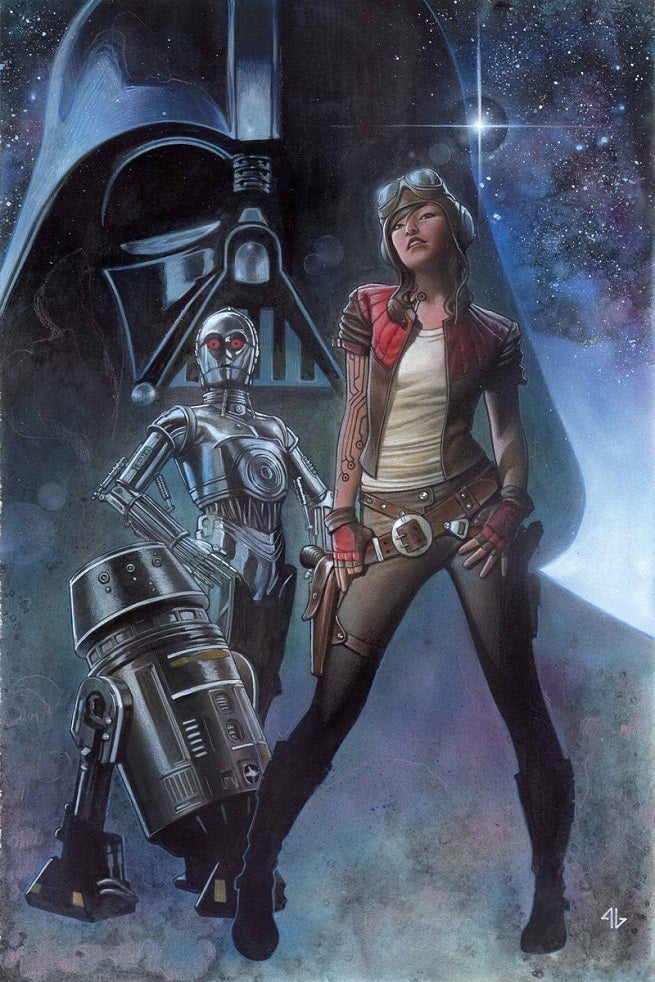 Fans may have noticed in the March 2015 solicitations from Marvel Comics that Darth Vader #3 features the introduction of a new character, complete with her supporting cast of Droids.

The obvious question, with the old Expanded Universe bordering on its official expiration date when Marvel gets the rights to Star Wars in January, is whether she could be a player in the upcoming sequel trilogy.

Besides Star Wars: Clone Wars, Star Wars Rebels and the seven threatrically-released feature films, Marvel's new comic book series will be all there is to the official Star Wars canon for the first little while, after all...and they're taking place around the time of the original trilogy, meaning that characters popping up here could plausibly play a role in The Force Awakens.

Note: As noted in the comments, there are some novels from Del Rey which are in the new canon, and apparently have already been released. We mistakenly believed them to be forthcoming.

Here's the solicitation text, for those who haven't yet seen it:

DARTH VADER #3
KIERON GILLEN (W) • SALVADOR LARROCA (A)
Cover by ADI GRANOV
VARIANT COVER BY SALVADOR LARROCA
• When a Dark Lord needs help, who can he turn to?
• Meet Aphra—the galaxy’s foremost raider of lost weaponry!
• Plus: could these be the deadly droids she’s looking for?
32 PGS./Rated T …$3.99
Star Wars © Lucasfilm Ltd. & TM. All rights reserved. Used under authorization. Text and illustrations for Star Wars are © 2015 Lucasfilm Ltd.

Certainly it's a convention in comic books that the "Meet _____!" solicitation tends to happen when the character is going to have a big impact on the book which they're appearing. Whether that big impact will expand beyond the Marvel Comics and reach out to Rebels or the movies is obviously not clear...but it's a tantalizing prospect.

Certainly, she seems to be set up as an analogue to our heroes: She's got the dark, "deadly" droids, is standing in a loose interpretation of Luke's position on the movie poster juxtaposed with the same disembodied Vader head used on many posters and home video cases, and dresses a bit like Han Solo.

That she's a "raider of lost weaponry" is interesting, too: since the comics are set during the Original Trilogy, that might imply that Vader had -- or at least sought -- an upgrade that audiences weren't previously aware of, or at least that someone in the Empire did.

For reference, her droids appear to be an R5 astromech unit and a 3PO series protocl droid.

And, of course, since Luke couldn't recognize the lightsaber in Star Wars, anyone with access to lost weaponry could plausibly have a treasure trove of those, explaining why they're mostly out of circulation in spite of the fall of the Jedi.

Could this be someone we meet, or who gets referenced, in future non-comics media? We're guessing yes...although Rebels may be a better guess than The Force Awakens, just for timeframe reasons.

Of course, there are always rumors of a Darth Vader spinoff film, too...!

Is Marvel's Darth Vader Comic Introducing A Character We Could See In Star Wars: The Force Awakens?