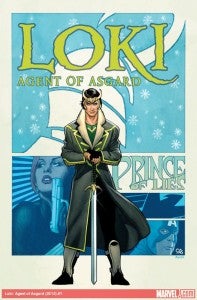 Al Ewing, writer of the upcoming Loki: Agent of Asgard comic book series, told a fan via Tumblr today that he intends to explore the fluid gender and sexuality of his lead character. Going all the way back to Norse mythology, Loki has occasionally taken the form of a woman in stories--sometimes as punishment, other times to aid him in deceiving someone. He's always been treated as a bisexual character in mythology, although in the Marvel Comics version that's not something that's been too deeply explored. Now, of course, Loki is at the peak of his popularity among comic book and movie fans, with Tom Hiddleston's version of the villain clearly playing a role in how he'll be portrayed in the upcoming comics. So, given the fact that his Loki hasn't really had any overt references to sexuality in the films, what might Ewing be doing with that part of his personality? Ewing answered a fan on Tumblr earlier today, "Yes, Loki is bi and I'll be touching on that. He'll shift between genders occasionally as well." "Shift" is of course a key word. Not only is Loki gender-fluid, but he's exhibited shape-shifting abilities across the board before--something (along with the willingness to seduce anyone in the right situation) that could very well come in handy if, as has been suggested, there's a bit of spy drama and political intrigue built into the series when it launches early next year. As a side note, Tom Hiddleston said earlier today that, if they did the gender-swapped Loki storyline in a film, he'd like to see Jaimie Alexander, who plays The Lady Sif in the films, attempt the female Loki, noting that Loki has been known to use Sif's appearance, specifically, in the past.

Loki Is Bisexual, Will Shift Between Genders, Says Loki: Agent of Asgard Writer