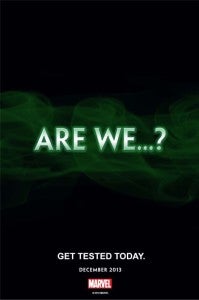 Marvel Comics continues their latest teaser campaign with another new message. Comicbook.com just received this teaser image from Marvel, which asks the question, "Are we...?" At the bottom of the teaser image is the message: "Get tested today." In the email accompanying the teaser image, Marvel Comics also teased, "Big things are coming. Find out what, September 18th!" While it's still unconfirmed exactly what Marvel Comics is teasing, it's starting to look more and more like it's something involving the Inhumans. The smoke that has appeared in the background of all the teasers is likely the Terrigen Mists. Today's message of getting tested could indicate that normal people get exposed to the Terrigen Mists, which could lead to them developing powers. An earlier teaser indicating a new threat to the Marvel Universe also suggests that maybe these newly empowered individuals are considered threats. There have long been rumors that Marvel Studios is planning an Inhumans movie as part of their Phase 3 plans, so it would make sense that the Inhumans would become a bigger focus in the Marvel Comics Universe.