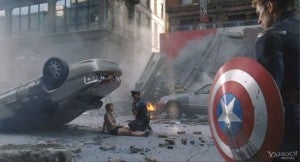 Assuming current trends continue for the four-day holiday weekend, Marvel's The Avengers will not break into the top ten at the domestic box office following a last-minute announcement late this week that the film would get a week-long Labor Day reissue at movie theaters around the country.

According to Box Office Mojo, the film came in fourteenth place on Friday with about $625,000, which brings the film's total domestic gross to over $618 million but certainly falls far short of providing the kind of bump that could move the film up the all-time list.

Deadline is reporting that they've got projections for the four-day weekend they're pretty comfortable with so far, and The Avengers doesn't look likely to bounce back and take the box office by storm. Deadline's list ends with the top ten, a list The Avengers doesn't appear on. The only film projected to crack $20 million is The Possession, Spider-Man director Sam Raimi's horror flick that's on pace to do exactly that number. Nothing else appears to be close, with fourth-week hold-overs The Campaign and Hope Springs bringing up the ninth and tenth spots with between $5 million and $10 million for the four-day weekend.

Assuming a respectable week in the theaters, though, it's likely Marvel's The Avengers could surpass $1.5 billion worldwide by the time it leaves U.S. movie houses once and for all at the end of this week. The film currently stands at $1.492 billion, and needs just less than $8 million to cross that threshold. While it's widely expected to hit that mark before it's out of theaters worldwide, it's difficult to see how it might do that without a strong performance at the U.S. box office this week; it's been out for over three months in almost every major market, with only Japan and Bangladesh seeing a release during August. If it's to make another $8 million without the U.S. box office to prop it up, it'll likely be trickling in a few hundred thousand a week.

It's probably also worth noting that Marvel Studios unintentionally got people thinking there might be additional new footage back on Thursday when the re-release announcement was made--but rather than taking advantage of that misapprehension, letting people come and then saying, "Hey, sorry, but we promised you no such thing," they issued a clarifying statement, which probably cost them a few bucks.
Start the Conversation

The Avengers Re-Release Fails to Crack the Top Ten