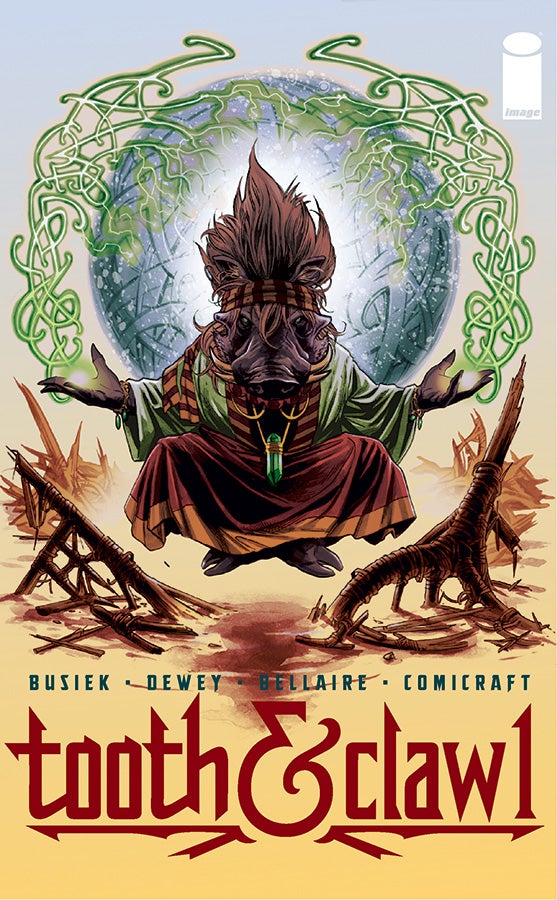 As rare as an oversized comic with a low price and no nonsense may be, the real draw of Tooth and Claw #1 is the team creating it. Kurt Busiek. Benjamin Dewey. Jordie Bellaire. Creative pitches for a new series don't get much better than that and this team absolutely lives up to the high expectations come with their names.

Dewey's work in this issue will ensure that his name appears more frequently in comic shops and message boards. The art in Tooth and Claw #1 is stunning. Over the course of 48 pages Dewey constructs a complete world, one that is steeped in its own culture and history. Every panel reveals some new facet of architecture, fashion, or a different subculture. It is an immersive experience, one that makes you feel as though you are part of a different world, one that has existed for thousands of years. The experience leaves you wanting to see more of this world as even 48 pages seem to reveal only a small fraction. These panels are each worth more than a thousand words as they build a complete world from nothing.

Dewey's storytelling easily matches his sense of design. There are pages in Tooth and Claw #1 that will have readers seeking out his work, searching for earlier examples of his breathtaking compositions. There is one splash page (pg. 35) that will cause jaws to drop and eyes to bulge. The draftsmanship present in this one panel creates a palpable sense of impact, one that is loud and forceful. The onomatopoeia that runs across the page continually pulls the eye back into focus with the climax of this issue.

Bellaire's work on colors helps bring these spectacles to life. She infuses the magic with bright, kinetic energy that differentiates it from the rest of the page. In her capable hands it shines as something special and helps to guide the eye through the chaotic action of some pages. Bellaire also provides more subtle work with landscapes and urban environments. Her palettes capably construct the feel of a meadow on the edge of mountainous terrain, summoning images of the slow transition between Nebraska and the Rocky Mountains in Colorado.

Busiek's ideas regarding systems and the manner in which they change are much more clear. The structure of the world in this issue is based heavily on class politics and the obstinance of those who hold power. Seeds of an origin myth and the splintering of religious beliefs are planted as well. It's a fascinating set up and one that is rife with potential metaphors and commentary. Although the world of Tooth and Claw may look very different from our own, there are plenty of similarities to be found as well.

Tooth and Claw is another incredible debut from Image Comics, a series that promises the world and then delivers. It is the first chapter of another saga filled with potential from a creative team that has proven they can deliver on high concepts and drama both. There's a lot to love in this issue and it's only the beginning.