The Guardians are roaring back onto the big screen this week and no website is more excited about that than ComicBook.com.

Not only is this one of the most innovative, fun, and diverse blockbusters in existence today, but it also pulls on some very deep cuts from comics history. The heroes of this team were C-listers at best a decade ago, but they were always great characters crafted by some of Marvel Comics best talent.

So as we all prepare to revisit our favorite spacebound superheroes, ComicBook.com has also assembled a list of comics recommendations for readers interested in seeing how these individuals fare on paper, as well as the big screen.

We’ve taken each of the 8 members of the team in Guardians of the Galaxy 2 and provided a comics recommendation for someone interested in picking up some new reading. These selections are hand-picked for a new reader, and while they might not always resemble what you see in the theater, they’re all some top notch comics.

This story wrapped less than a month ago, but it’s an easy nomination for a comics introduction to Peter Quill. The comics version of Star-Lord was a vastly different character at creation than the one seen in the movies or comics of today. This six-issue arc resembles the rapscallion audiences have fallen in love with trapped on Earth trying to make good without his regular crew. It’s a small story set in New York City, but it’s still packed with laughs, adventure, and plenty of sexy, shirtless shots of Star-Lord. 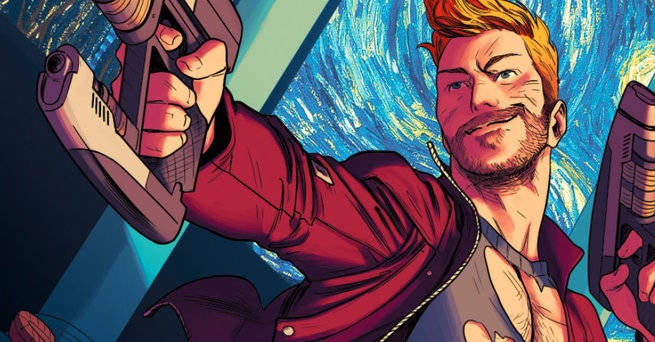 Gamora is one of the most important Guardians, but she has almost always played a secondary role in the comics with very few series actually starring this dark and deadly anti-hero. Creator Jim Starlin featured her prominently in the adventures of another one of his creation’s Warlock (hinted to appear in the third film). This story known as “The Magus Saga” reveals Gamora’s tragic origin and her incredible combination of resolve and strength. While she’s still in a supporting role, she absolutely steals this story.

This mini-series was part of the lead-in to the Annihilation event in which the modern Guardians of the Galaxy were first established. It also distills everything that is great about Drax. After crash landing in rural America with a pack of nefarious, intergalactic bad guys, Drax befriends a little girl and reveals what he’s really made from. It’s a perfect combination of dad feelings and deadly knife play that reminds us why we love this very odd fellow.

This isn’t quite the same Rocket Raccoon that fans know from the movies, but that doesn’t make this adventure any less thrilling. It’s a weird, wild space opera packed with talking animals (including a walrus). And the best part is that it’s drawn by none other than Mike Mignola. The guns and cocky attitude of this series lay the foundation for the Rocket of today, but this is a story that has to be read on its own terms because it’s unlike anything else you’ve seen in comics.

Groot may be the Guardian who has changed the most from his original appearance to his current incarnation. He began as a Marvel monster before the Fantastic Four were even a thing, but is now a loving and loyal friend who can held in any scenario. This series perfectly embodies that current inception of Groot as he moves throughout space in a wonderfully illustrated story where all he really needs to say is “I am Groot.”

Yondu is a character who received a dramatic makeover for the movie and that’s not a bad thing. In the comics he was an almost forgotten hero of the future, but that doesn’t mean he still didn’t have some great stories in his history. During “The Korvac Saga” he and fellow Guardians teamed up with the Avengers to defeat an omnipotent being, leading to some very heroic sacrifices. It shows why Yondu was just to great to be forgotten, both as a character design and an actual character.

Nebula’s most important appearance in comics likely lends some clues to the future of the Marvel Cinematic Universe as well. She plays a key role in The Infinity Gauntlet, Thanos’ first attempt at conquering the universe. The event explains both her complex psyche and the disturbing relationship to “father Thanos”. It’s fascinating and shows off what a great character Nebula can be, and why she alludes the titles of hero and villain in comics.

Mantis, much like all three of the new additions to the team in Guardians of the Galaxy 2, doesn’t have many prominent comics storylines. That’s likely to change in the wake of the new movie, but for now her most exciting appearances still lie in the 1980s. It’s there that she was deemed the “Celestial Madonna” and became a key part of an Avengers storyline. In a giant-size issue she and husband Swordsman had to team up with the beloved couple of The Vision and Scarlet Witch to save Earth, and it’s a great starting point to see why Mantis will be sticking around in the movies.

A Comics Introduction to Guardians of the Galaxy