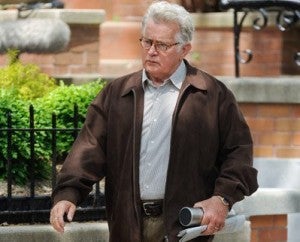 In the commentary track for The Amazing Spider-Man, director Marc Webb had a number of interesting things to say. In addition to revealing that the "origin" of the spiders that inform Spider-Man's origin will be told in a later film, the director also told listeners to the audio track that none of the main "parent" figures in the movie--Aunt May, Uncle Ben or Captain Stacy--had to audition; that those actors were the first choices for the roles and that the decision was essentially made before reaching out to any of those performers (Sally Field, Martin Sheen and Denis Leary, respectively) that if they took the job, it was theirs. And, perhaps most interestingly, the filmmaker revealed that Martin Sheen wants to return for the second film. According to Webb, Sheen had proposed that his death scene in The Amazing Spider-Man could be a dream sequence so that he could return in the second movie. (One or both of them--Sheen and Webb--could have been joking about that; it's hard to tell.) While Webb seemed skeptical of that strategy--"We'll see what Marvel thinks about that," the director said--he seemed open to possibly bringing the character back in flashback. On the question of Marvel's concerns, Webb also noted that Uncle Ben's death, which they changed somewhat from the comics, was the hardest change to get cleared by Marvel, who wanted to make sure that the tone and sensibility of the character's death was retained from the comic book source material. In the film, Uncle Ben dies after attempting to stop the same thief that Peter had failed to stop only moments before. Rather than have it be a totally random incident that happens across town, and hours apart (as it was in the comics, and in the first Raimi film), the cause-and-effect of Peter's failure to act and then Ben's death (while attempting to act without the benefit of powers) is much more closely juxtaposed.