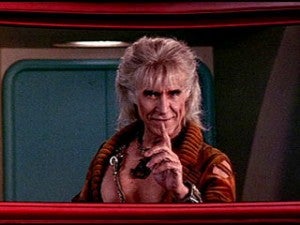 Benedict Cumberbatch has, in cooperation with the Star Trek Into Darkness writers and producers, kept fans totally in the dark so far as to the identity of his villainous, mysterious role in the upcoming science fiction epic. That said, with the release of The Hobbit: An Unexpected Journey about a week away and many IMAX prints of that film featuring a nine-minute introduction to the new Star Trek film, it doesn't seem entirely beyond the realm of possibility that we'll find out who the villain is during the fairly sizable chunk of the movie Paramount intends to tease audiences with on Friday. For that reason, it seemed an ideal time to look at the most likely candidates. Yesterday, we looked at Gary Mitchell; today, we'll examine Khan Noonien Singh, the only other character being seriously discussed by most fans and frankly the odds-on favorite for a number of reasons. Now, Simon Pegg (who plays Scotty in the film) has already said that it's not Khan–but that doesn't mean a whole lot to the fans, who are pretty convinced that it's either him or Mitchell (who has also been denied). So keep all of that in mind, and go ahead and read the reasons we think he's a strong candidate: 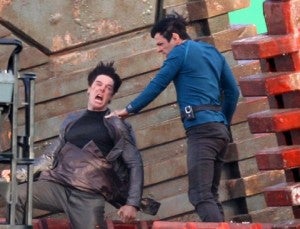 Trek Movie Said So Trek Movie is a superb fansite that tends to get things right -- and they, unlike Karl Urban who joked-or-didn't-joke that it was Mitchell--aren't under contract to Paramount to keep a tight, heavy lid on things. Here's what they had to say back in April:

"While big news, this is actually not a huge surprise. Trek's new filmmakers have often cited the Christopher Nolan's Batman series as their model, with the second film The Dark Knight successfully bringing back the Joker and Khan is the closest to Trek gets to Batman's Joker. And again the team kind of already let the cat out of the bag on this one when they recorded the DVD commentary back in 2009 and said they had considered a post-credits scene showing the Botany Bay, Khan's sleeper ship. Then of course there is Abrams widely reported casting process which began with Benecio del Toro and went through a number other prominent Latino (like [original Khan actor Ricardo] Montalban) actors before he ended up picking Cumberbatch, after what has been said to be a very powerful audition."

They've never backtracked on this yet, so it seems that either someone has really, really put one over on the Trek Movie folks or Khan's the guy. The revenge motif Yeah, we gave this reason for Mitchell as well. Still, it arguably fits Khan better. For starters, revenge was actually a driving force in Star Trek II: The Wrath of Khan, whereas Mitchell never really had that driving him. We were able to extrapolate a motive for revenge based on the source material we have at hand, but for Khan there would be no need for fancy mental gymnastics; he's got plenty of reason to want revenge just based on the premise of his character--a deposed dictator, exiled and then returning to take what he believes to be his and punish those who "stole it" from him. The rambling monologue The monologue we saw in the announcement trailer is, as many fans have pointed out, the kind of emphatic declaration that someone used to having power would make. The "gentlemen, shall we begin?" bit reeks of someone who feels he's at a strategic advantage, but at fundamentally the same level as his opponent. That fits Khan, the deposed dictator, better than someone like Mitchell, who never quite lived up to Kirk before gaining amazing powers and surpassing him. The studio reportedly rejected Mitchell Okay, so maybe it's a leap to assume that just because Gary Mitchell was reportedly nixed, that means they're going to run with Khan. Or maybe it isn't. Badass Digest had this to say on the matter of Gary Mitchell, back when Karl Urban's remarks suddenly made the character the top candidate on the minds of many fans:

"Years ago I had sources tell me that Gary Mitchell was in fact the villain in Star Trek 2, but that was before serious work started on the film. My understanding is that Mitchell is who Orci and Alex Kurtzman wanted, but J.J. Abrams or Paramount or a combination of the two decided otherwise. As a result, Mitchell was given to the IDW comics, which published his story in late 2011. This would have been while Star Trek Into Darkness was in pre-production; the actual comics would have been written earlier, but presumably at a time when Orci and Kurtzman knew that Mitchell wouldn't be their villain."

It's hard to imagine the studio stepping in and rejecting a villain, unless they had designs on another one. And who better than Khan, a well-known and marketable character? Which leads us to our final point... Star Trek II: The Wrath of Khan Let's leave aside for a moment the fact that we're looking at Star Trek II again. That's kind of a shallow, surface-level observation, and it's not like Star Trek pitted Kirk and co. against the same nemesis as Star Trek: The Motion Picture. But we're saying that Star Trek II: The Wrath of Khan is the most likely reason that Khan will be chosen as a villain in this movie. The first film, you needed to establish the characters, and you needed to establish what J.J. Abrams and company were doing with the Star Trek universe and how  they were doing it. The reality-altering nature of Nero's threat was key to rebooting the franchise without losing the original series and everything that came after it as canon. You couldn't use a character like Khan for that story (although Mitchell may have worked, if they'd been keen to go in that direction). As Trek Movie pointed out above, Khan is viewed by many fans (especially casual fans) as The Joker or Lex Luthor to the crew of the Enterprise. This is partially because Star Trek II: The Wrath of Khan is widely accepted as not only the best standalone Star Trek film made so far, but in fact one of the best science fiction films of all time full stop.

Oh, yeah, and the jacket. Yeah, the headline says five. But it's been brought to our attention that the wardrobe designer may have had a bit of fun with us. Check out this screen grab from the announcement trailer and tell us the odd texturing on the collar isn't a bit reminiscent of the one Khan Noonien Singh is wearing at the top of the article.