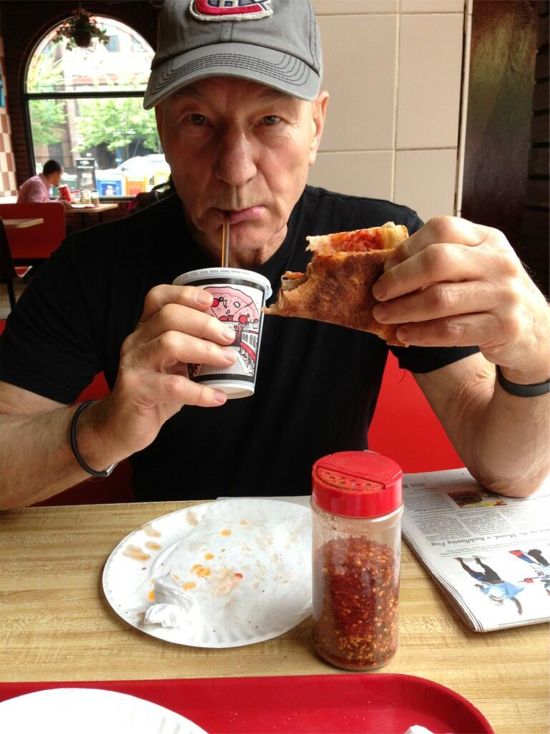 Yesterday, the biggest story hit Twitter since Megan Fox joined then quickly abandoned Twitter earlier this year. Sir Patrick Stewart tweeted the stunning revelation that he was enjoying his first ever pizza slice. The world was shocked and stunned that a 72 year old man could have lived his entire live without ever partaking in a delicious pizza pie. As media from around the world pounced on the story, Stewart tweeted a clarification that he had "never had a slice." Still, the clarification only added to the bewilderment as many wondered if Stewart meant that he had just never had a New York slice of pizza before. The sleuths at The Atlantic Wire tracked down a previous interview where Patrick Stewart actually made a reference to reheating some pizza. Was the venerable thespian lying? Or did he just like heating pizza but not consuming it? Well, now the mystery has been solved, thanks to the combined investigative power of the BBC and New York Magazine. Patrick Stewart has clarified that he has eaten pizza before, but he's never eaten it by the slice. Stewart explained, "But, you know, I would go in there and order a pizza and eat a whole pizza. It was the concept of the slice that I had never encountered before." Of course, the fact that Patrick Stewart had never encountered pizza by the slice before might actually be more bizarre than the idea that he had never eaten a pizza before. Then again, the most bizarre thing might be how this story not only hit the entertainment press, but became a major news story around the world. As Stewart himself put it, "I just did an interview with BBC, the main evening news program. And it's been years since I've talked to them. And it's all, you know, about a pizza slice." Patrick Stewart is currently in process of reprising his role of Professor X in X-Men: Days Of Future Past, where hopefully no adamantium-clawed mutant will try to slice his pizza, because the Professor likes his pizza whole not sliced.

The Great Patrick Stewart Pizza Eating Mystery Has Been Solved