Thousands of people flocked to Orlando, Florida, this weekend for Star Wars Celebration to commemorate 40 Years in a Galaxy Far, Far Away.

And with such a huge milestone to celebrate in the Star Wars universe, Lucasfilm and Disney did not skimp out with the surprises. Today they unveiled the first teaser trailer for The Last Jedi, giving fans a glimpse into the future of the main Saga. They also put together a touching tribute for the late Carrie Fisher and her storied career throughout the history of the Star Wars films.

They also brought back the man who started it all, George Lucas, who was commemorated in a way that honored his legacy while looking toward the future of the franchise. Because while we are all living in his monumental shadow, it's also a huge display of appreciation to see how much he himself is looking forward to the future of Star Wars.

But yesterday's 40th Anniversary panel showcased all of the greatest aspects of Lucas' time on the six Star Wars films he brought to life. And what is a billion dollar property right now began life as a monumental risk for movie executives in the 70s.

And Lucas would not have been able to accomplish anything if an executive at 20th Century Fox did not take a chance on him.

Lucas spoke a little bit about how he was able to make the film and why he decided to move forward with an epic space myth, then talked about the decision to bring the space adventure to television screens across the globe.

Click the slideshow to learn more about the moment Lucas decided to move forward with Star Wars.

The Dawn Of A New Hope 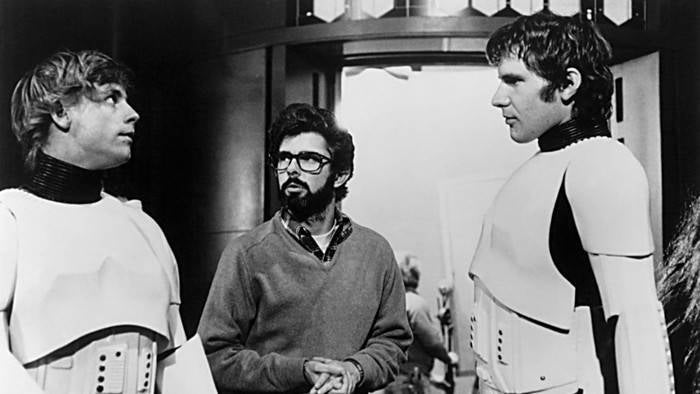 A lot of people may be confused about the process Lucas went through to make the original Star Wars film, because it wasn't a complete idea even when they were shooting it.

So, to clarify: no, it wasn't always Episode IV: A New Hope.

"Star Wars evolved, it didn't come out in one thing," Lucas said. "There was a moment, but it was, like, an idea. And the idea was more, I would like to make an action movie which is more like a Saturday matinee serial that I enjoyed as a kid but imbue it with mythological, psychological motifs, because we don't have any of those today. I said, well I wanna take these two things and put them together."

Lucas was only able to execute that idea because of the Richard Dreyfus-starring movie American Graffiti, which put him on the map as a director after the formative days at University of Southern California's film school.

"We had all these [American Graffiti] screenings and the head of 20th Century Fox came, Alan Ladd Jr., he just came up to me afterwards and said, 'I love this movie, I think this is the greatest movie of all time, I wanna do your next movie. I don't know what it is but you're a talented guy and I wanna make the movie.' And I said, 'Well, I got this movie, it's sort of a space opera thing. We have big dogs driving spaceships.' He said, 'Okay, I'll do it,' and he followed through, even though the board of directors was saying, 'What in the world is this?' And brought it to the very end and he fought for it and he helped me make it."

Without Ladd Jr.'s support, Star Wars would not be what it is today. Lucas also referenced those original ideas and how they constantly changed, allowing him to perfect the final story on the cutting room floor.

"That's when I begin to own the idea because I was still writing scripts and, any of you who read the books, know I took an idea and I was looking for a story and I was looking to make it be something, so I went through a lot of different versions of it." Lucas said. "Even when I was shooting in Tunisia, I was still rewriting. The idea was simply to do a high adventure film that I loved when I was a kid, with meaningful psychological themes. I didn't know what I felt, it was a really cockamamie idea."

A lot of people might not know that Lucas was instrumental in the Star Wars saga's success on television.

Though there are many ideas and time periods that lend themselves to serialized storytelling, few were perfectly suited for the medium like the Clone Wars.

Lucas spoke about his ideas for television and why he prefers weekly storytelling to films—for certain stories, at least.

"I had done Indiana Jones for television and it's a great, experimental cauldron because there's not that much at stake." Lucas said. "You're not saying, 'Here's 100 million dollars, it's all on your shoulders. In the next four months, if you screw up, it's all gone.' It's a way to be able to put out a lot of product, a lot of stories. And that's really why we started Clone Wars."

The Star Wars film saga left a lot of room to explore the time between Attack of the Clones and Revenge of the Sith, to further define why Skywalker would choose to become Darth Vader.

"I said, 'This is an interesting idea, we can do a lot of stuff in this.' It really came out of the idea that there's a lot of stories there and I'd like to tell these stories but I could never put them in a theater because they're more interesting in long-form than in a short-form."

The series was more than successful and is being followed up by the Star Wars Rebels series on Disney XD.

"With the Clone Wars, we tried very hard, and I think we succeeded, in creating a feature quality TV show," Lucas said, referencing to the initial episodes/movie that kicked off the series. "The lighting, the characters, the animation, was all feature quality and we did it on a TV budget. We were able to tell stories and expand the universe and bring in great characters, like Ahsoka, that we would have never been able to have."

Ewan McGregor Had to Relearn His Obi-Wan Kenobi Voice