The CW has released new photos from "Labor Day", next month's season premiere of Riverdale.

The new photos reveal Riverdale's "Core Four" spending some time together at what might be Sweetwater River as well as gives fans a glimpse of Archie's (K.J. Apa) murder trial. You can check out the photos in the gallery below. 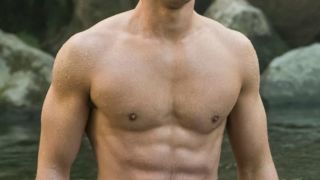 As fans will remember, Archie was framed for murder by Hiram Lodge (Mark Consuelos) in the Season 2 finale, and the town will be pulling out all of the stops with regard to his trial. However, while many fans have assumed that Archie's trial will unfold over the course of the season, it turns out that Archie's fate will be known by the end of the season premiere.

"We see the results of that trial really quickly," showrunner Roberto Aguirre-Sacasa told TVLine recently. "We'll find out his fate in Episode 1."

And that fate? might not be a positive one. Aguirre-Sacasa also hinted that the outcome of the trial "might pose a threat" to Archie's relationship with Veronica (Camila Mendes), but that the pair "is proving more resilient than [we] originally thought... Their attraction is pretty epic."

Whatever the outcome, one thing that is certain is that Apa is willing to explore Archie's time in prison on the series.

Away from the murder trial and legal drama, there will be far more for "Core Four" to deal with this season -- including a cult-like group affecting the Cooper family.

"[The Farm will be one of] a couple of different mysteries that sort of crisscross as the season goes," Aguirre-Sacasa teased. "Cults felt very zeitgeist-y, and very relevant to Riverdale."

Are you getting excited for Riverdale's third season? Let us know in the comments below.

The season three premiere of Riverdale, titled "Labor Day," will debut on Wednesday, Oct. 10th, at 8 p.m. ET on The CW.