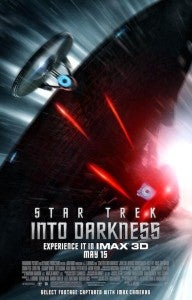 Are you the 1701? In 3-D? That's what Paramount Pictures wants to know; this morning, fans and members of the media received a message in the mail with a pair of 3-D glasses and a note attached: "You've been chosen as one of the 1701. Go to AreYouThe1701.com/3DTrailer at 12 p.m. PST on May 2nd. Watch the new trailer in 3D first." "Are you the 1701" has been a key component of the film's viral campaign, which has also included a site where fan-shot Star Trek photos can be viewed after they're uploaded to Twitter with the #areyouthe1701 hashtag. The concept comes from the designation of the U.S.S. Enterprise, which is NCC-1701.